IBMA (International Budo-Man Association) is not a school of Karate. Our major purpose is promotion of “communication” among all the people of the world. Karate is a martial art that originated in Okinawa, after which it was subsumed into and merged with Japanese martial arts culture, where it came to be known as the Way of Karate. While placing primary importance on the passing on of the traditional Way of Karate, our intent is to develop Karate in such a way that it will be of practical use to people and society.

Our dream is communication with the bodies and hearts that we hold in common with all the people of the world, utilizing the Way of Karate as a means to discover an inherent universality. Up to this time, the mission of Karate has been “to become stronger than other people.” But we have reconsidered that mission and now propose a new mission.

Our new mission is to affect “human communication” through the Way of Karate, by means of which we want to “understand” the differences embodied in the various disparate cultures, and, through that “understanding,” to grasp its universality. In addition, we want to make the Way of Karate useful in fermenting an ideology and a sense of values for nurturing “respect” for each other. We are convinced that this is the ideal developmental form of the Way of Karate. And we call people who are mutually involved in accomplishing this mission “BUDO-MAN.” 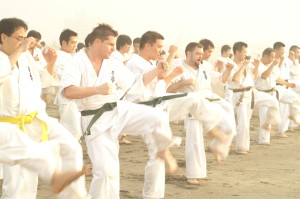